​Our Founders: ​
​Donald and Charlotte MacJannet 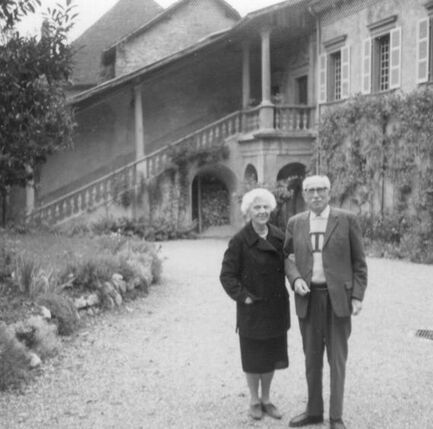 Donald and Charlotte MacJannet in front of Le Prieure, now home of the Tufts University European Center in Talloires, France.
Donald and Charlotte MacJannet touched thousands of lives through their American Schools in Paris; summer camps on the shores of Lake Annecy in Haute Savoie, France; their continual promotion of international learning and cultural exchange between Europe and the US; and their donation and establishment of the Priory in 1979 as the Tufts University European Center.
​
At the heart of the MacJannet legacy was their living and teaching the values of tolerance, enlightenment and cultural understanding.  They achieved this by creating structured educational experiences for youth and adults that promoted the ideals of hard work and discipline paired with experiential learning, cultural exchange, and mutual respect.

The MacJannets defined the ideals of “global citizenship” and “civic engagement” and how it could be used to change peoples lives and serve as a force for good. The MacJannet Foundation was established in 1968 by the MacJannets and friends to continue their work and to sponsor worthy programs which promoted international tolerance, enlightenment and cultural understanding through structured educational exchange and experiences. Thus, The MacJannet Foundation’s work was started 50 years ago and has continued to fund worthy non profit programs in partnership with Tufts University, Les Amis du Prieure, and others. 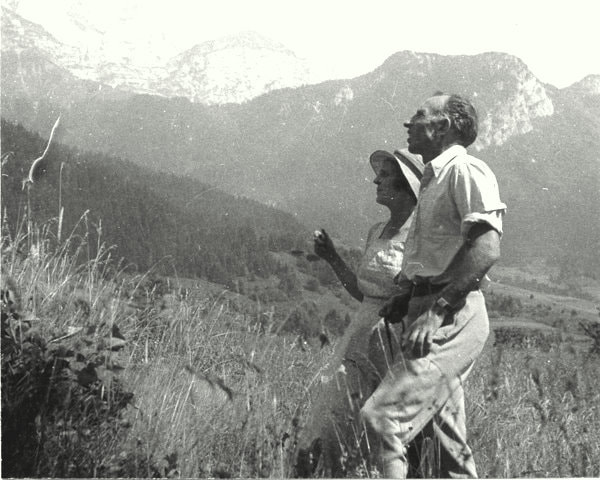 Donald and Charlotte MacJannet hiking in the Haute Savoie region of France (with a view of La Tournette, in the background).
Their Story
Donald MacJannet was born in 1894 the son of Robert McJannet, a fundamentalist Scottish-born minister, and Irene Waters, of old New England ancestry. Donald was one of five children, but was orphaned at age 15 when his mother became gravely ill. At that time, Donald and his younger sister, Jean, moved to Medford, MA, to live with a family friend. Unfortunately, he soon became the primary supporter of not only his younger sister, but also of the widow with whom they lived.

MacJannet attended Tufts by earning a scholarship and then by working part time as a church janitor and a cookware salesman to pay his expenses. He thrived at Tufts earning a varsity letter in track, singing in the glee club, and taking up French, German, and Latin. When he graduated Phi Beta Kappa in 1916 with a degree in French literature, his classmates elected him the rare honor of serving as both Class Day and Commencement Orator.

MacJannet taught at the St. Albans School in Washington, DC, served as a World War I pilot, and studied at the Sorbonne. His real passion, however, was teaching and in 1924 he founded his first school, the MacJannet School for Young Americans outside Paris. The following year he opened a second school in St. Cloud, France.
​
In 1925, Donald acquired a piece of land at Angon on Lake Annecy in Haute Savoie where he opened the MacJannet Summer Camps – Camp L’Aiglon for boys and Camp Alouette for girls. These camps catered to the international students attending his Paris Schools and later french children as well. The MacJannets operated the camps from 1925 until 1964, closing them for a brief time during World War II when they used the camps to lodge french war orphans. Hundreds of children attended the MacJannet schools and camps over the years including many prominent figures such as: Prince Phillip and Indira Ghandi.

MacJannet met and married German-born Charlotte Blensdorf in 1932. Prior to their meeting, Charlotte had started her own school of eurythmics in Sweden after World War I. Eurythmics is a discipline which stresses training in rhythm, music and movement. After hearing Charlotte talk about her school, MacJannet invited her to see his own philosophy of education in operation at his camps, one that placed emphasis on individual achievement, the pursuit of individual interest, tolerance, teamwork and mutual respect. Two months later, the MacJannets were married.

The confluence of philosophies made for a successful camp environment. They were devoted to young people and during World War II the MacJannets fled Europe only after securing the safety of their campers. During the war, they raised money in America and used the camp to house French war orphans, returning in 1952 and continuing to operate the camps until 1964.
​
In 1958, the MacJannets purchased the Priory at auction, and the couple throughout the 1960s and into the 1970s, used the Priory to house educational sessions, as well as concerts and ecumenical conferences. In 1968, the MacJannets and friends established the MacJannet Foundation to raise funds to help promote cultural exchange and the study of international relations as a positive force for world peace and prosperity. In the early 1970’s, they set up an endowment for an exchange program with the Fletcher School of Law and Diplomacy and the Graduate Institute of International Studies in Geneva to promote international learning.
​
Because of his strong allegiance to Tufts, he dreamed of seeing it as part of Tufts’ educational mission. On May 27, 1979, French Prime Minister Raymond Barre and a small group of academic, business and government figures joined Tufts President Jean Mayer in inaugurating the Tufts Center for European Studies.