​A History of Le Prieuré

The Priory (Le Prieuré) was purchased by the MacJannets in a state of near ruin in 1958 and dutifully restored by Donald starting in his early 70’s and lasting over nearly a twenty year period with the help of dozens of workers and volunteers. The MacJannets donated the 30-room facility to Tufts University in 1978 and the The Tufts University European Center was established shortly after that in 1979.

The Priory has a rich history dating back almost 1,000 years. The building was consecrated with the original church in 1031, and has played a pivotal role in the history of Talloires and Annecy region of France.

Documentation of the Monastery’s history began with the Charter of 1018, when Queen Ermengarde, wife of King Rudolphe III of Bourgogne, gave Talloires and its surrounding lands to the Benedictine Abbey of Saint Martin in Savigny near Lyon. Germain, the first Prior of Talloires, was sent by the abbey shortly thereafter to manage the donated site. Under Germain, the monastic community erected a magnificent church which stood in front of the present-day Priory. Consecrated in 1031, the church was rebuilt after a fire in the 16th century.

During the Middle Ages, Talloires was a village governed by the law of the Prior. The Prior was the principal landowner in a village whose agricultural activity depended upon vineyards and the production of wine. The revenue from the vineyards and various taxes was used by the monastic community to establish several hospices and a school. In addition, the monks stood at the Porte de l’Aumone, (which today exists as a small platform outside the front wall surrounding the Priory) to distribute provisions to religious pilgrims and to those in need.

The 14th century witnessed a transfer of monastic power. A line of lay Priors, sons chosen from among the region’s aristocratic families, succeeded the religious line. Thus began a period of decadence for the monastery of Talloires. In 1674, the monastery’s independence from Savigny was established by Pope Clement VII. An addition was added in 1681 to house the monks — it now now serves as the Hotel de l’Abbaye.

The French Revolution put an end to an already decadent religious order. Angry mobs destroyed the church, its vast treasures and the historic records kept by the monks. ​Today, MacJannet Hall sits on the second floor, where the Prior once held meetings and administered justice, and retains a magnificent Savoyard ceiling dating from the 15th century. The 17th century fireplace is decorated with a crest of the Prior Charles Louis de Lances. 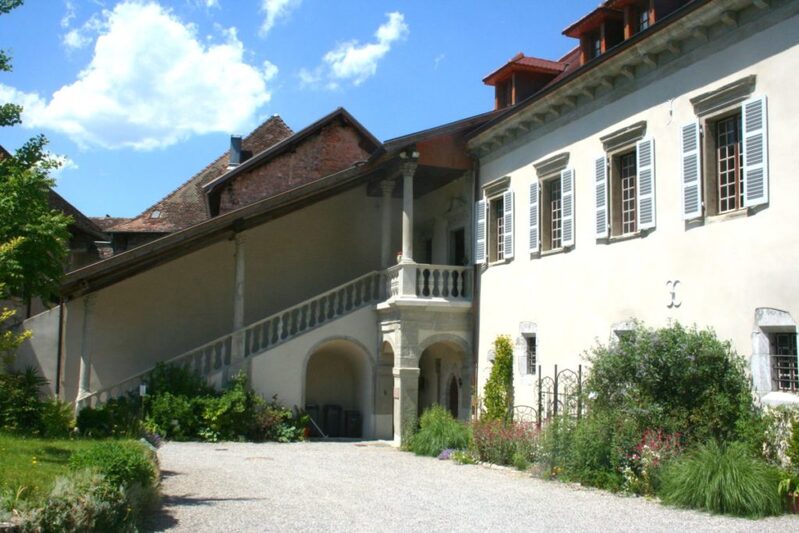 ​
The front facade, restored in the 17th century by Louis de Lances, is adorned with Corinthian columns and with a balustrade made of sandstone, a material widely used in the region.  The southwestern side of the building houses twin bays with pointed arches once part of the gothic chapel constructed by Cardinal de Brogny, first Commendary Prior of the 14th century.